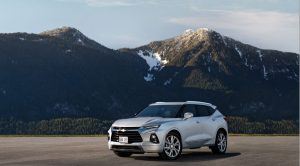 I’m sure that many of us can reminisce about taking the annual family road trip in our parents Chevrolet Blazer. Now you can keep the tradition alive because it’s back! The Chevrolet Blazer is the perfect mid sized SUV for anything life throws at you.

The original Chevrolet Blazer was introduced in 1969 to compete with the Ford Bronco, International Harvester Scout, and Jeep Cherokee. The 1969 Blazer was built on a pick up frame, it carried up to 5 passengers, included air conditioning, power steering, power brakes, push button radio, heavy duty shocks, and an auxillary battery. The Engine sizes were 4.1L 6 cylinder, 5L V8, and a 5.7L V8, and consumers could choose between three speed manual, four speed manual, or three speed automatic, and four wheel drive only. A two wheel drive option was introduced in 1970 and a fourth engine option; 4.8L 6 cylinder.
In 1973, Chevy added a removable convertible top. This option was not popular with consumers, and disappeared after 1975. The Blazer Chalet was introduced in 1976, and featured a pop up camper top which had a sink, two burner propane stove, an icebox and small table, and slept 3 adults. Higher trim levels included a propane heater, fridge, and fold out bunks capable of accommodating two adults. These were produced from 1976 to 1991.

Chevrolet introduced a miniature version of the original K5 called the S-10 Blazer. The S-10 was made to be more maneuverable and easier to drive. The S-10 Blazer came standard with a 2.0L 4 cylinder engine, or an optional 2.8L V6 or 2.2L diesel. A 4 door version was also introduced in 1991. Production of the S-10 Blazer ceased in 1994, when Chevrolet changed its name to the S-Blazer and added a standard 4.3L V6 engine, and anti lock brakes.
Sadly, Chevrolet discontinued production of the Blazer in 2005…until now.
Almost 15 years later, the Chevrolet Blazer is back with a vengeance, was released in early 2019, and is going on its second year in reproduction. It has taken the midsized SUV market by storm. Bearing more resemblance to a modern camaro, than to it’s ancestors in the 80s and 90s, with its lighter and more athletic stance, and sporty design. One thing is for sure. When you drive the new Chevrolet Blazer, people are going to notice you.
If comfort is your thing, you are going to love these seats. The Blazer offers good cushioning, a wide range of power adjustment options, and heated seats.
The 2019 and 2020 Chevrolet Blazer has so much to offer with its better than average fuel economy, hefty line up of standard features, and modest starting price.
If your lifestyle says SUV, but your heart says sleek and sporty, then the new Chevrolet Blazer is the perfect vehicle for you.